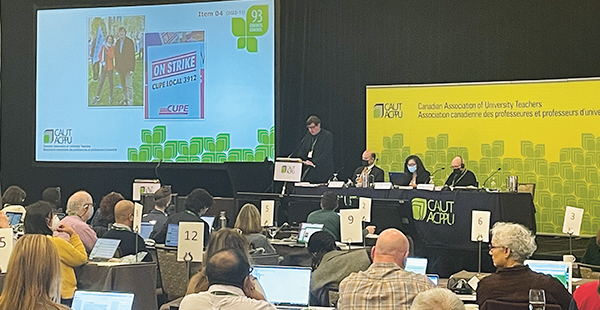 Report from Quebec: Focus on academic freedom and inclusion

Caroline Quesnel, president of the Fédération nationale des enseignantes et des enseignants du Québec (FNEEQ-CSN), told the delegates about the federation’s consultations that are underway to develop a policy on academic freedom. She noted that federation members will appoint individuals to a committee that is representative of the community in each institution. Quesnel noted the recent appointment of an FNEEQ advocate for sufficient public funding to support the inclusion of students with disabilities. FNEEQ-CSN represents 35,000 teachers including 12,000 contract teachers in universities throughout Quebec. There was also a report from La Fédération québécoise des professeures et professeurs d’université (FQPPU).

Council voted overwhelmingly to adopt a new policy statement on the targeted online harassment of academic staff who are conducting research in areas where scholarly findings are seen as threats, in fields perceived as controversial. Examples of targeted online harassment are “posting, sending, or circulating abusive, vexatious, graphic, defamatory, or threatening comments or material about an academic, and/or encouraging others to do the same” and “unauthorized publishing of classroom discussions or of private meetings between students and academic staff.”

The Targeted Online Harassment of Academic Staff policy asserts that it is the duty of college and university administrations to protect academic freedom and defend academic staff from targeted online harassment. Academic governance bodies should develop policies that prohibit recording or unauthorized distribution of classroom discussion or of private meetings between students and academic staff members. As well, institutions must provide resources, including legal and IT support for the targeted online harassment of academic staff.

The CAUT Council awarded honorary lifetime memberships to Penni Stewart, Bill Bruneau, Len Findlay, David Johnson and Françoise Naudillon for their important achievements and longstanding service as directors of CAUT’s Harry Crowe Foundation. The Harry Crowe Foundation is a charitable organization that undertakes education and research on the role of post-secondary teaching and research in contemporary society.

“With hard work and with a strong core of people it is possible to organize even in the most difficult workplaces,” said Fox-Decent. He added, however, that AMPL / AMPD is facing a threat of judicial review of the decision by the McGill administration.

He thanked CAUT for the expertise provided during six days of hearings leading to the decision. He also thanked the Fédération québécoise des professeures et professeurs d’université (FQPPU), the McGill Course Lecturers and Instructors Union (MCLIU), the Association of Graduate Students Employed at McGill (AGSEM), and the McGill University Non-Academic Certified Association (MUNACA) for their support.

Delegates stand up to age discrimination

Susan Spronk (Association of Professors of the University of Ottawa), co-chair of the Equity Committee, presented a policy statement on age discrimination that Council quickly adopted. She noted that age discrimination is recognized in various human rights codes and that this statement is about creating campuses across Canada that are free of discrimination based on age. Spronk advised applying an equity lens to this topic to better identify and address age discrimination that results from direct and indirect actions, inactions, policies and practices.

“Additionally, they [academic staff associations] should educate their membership about age discrimination, and its intersectional impacts (for example, forced retirement has a particularly large negative impact on workers in equity-deserving groups),” the statement reads.

The Censure U of T group at the University of Toronto was nominated to receive the Milner Memorial Award to members for their contributions to the cause of academic freedom. Council voted unanimously to present the Sarah Shorten Award to Kathleen Nichol of the Brandon University Faculty Association and Chantal Dion of the Carleton University Academic Staff Association. The J.H. Stewart Reid Memorial Fellowship Trust has been awarded to Jade Crimson Rose Da Costa, a writer, poet, community organizer and PhD candidate in sociology at York University, Tkaronto (Toronto). Jade’s work focuses on gender, sex and sexuality studies with a concentration on queer, trans, postcolonial and Black feminist theories.

By CAUT Staff A recent study by ANSUT – the Association of Nova Scotia University Teachers – has... Read more