On November 25 and 26, 2022, delegates to Council met in Ottawa — 193 in person and 56 online — to discuss priorities, elect new leadership, and honour the collective achievements of members. 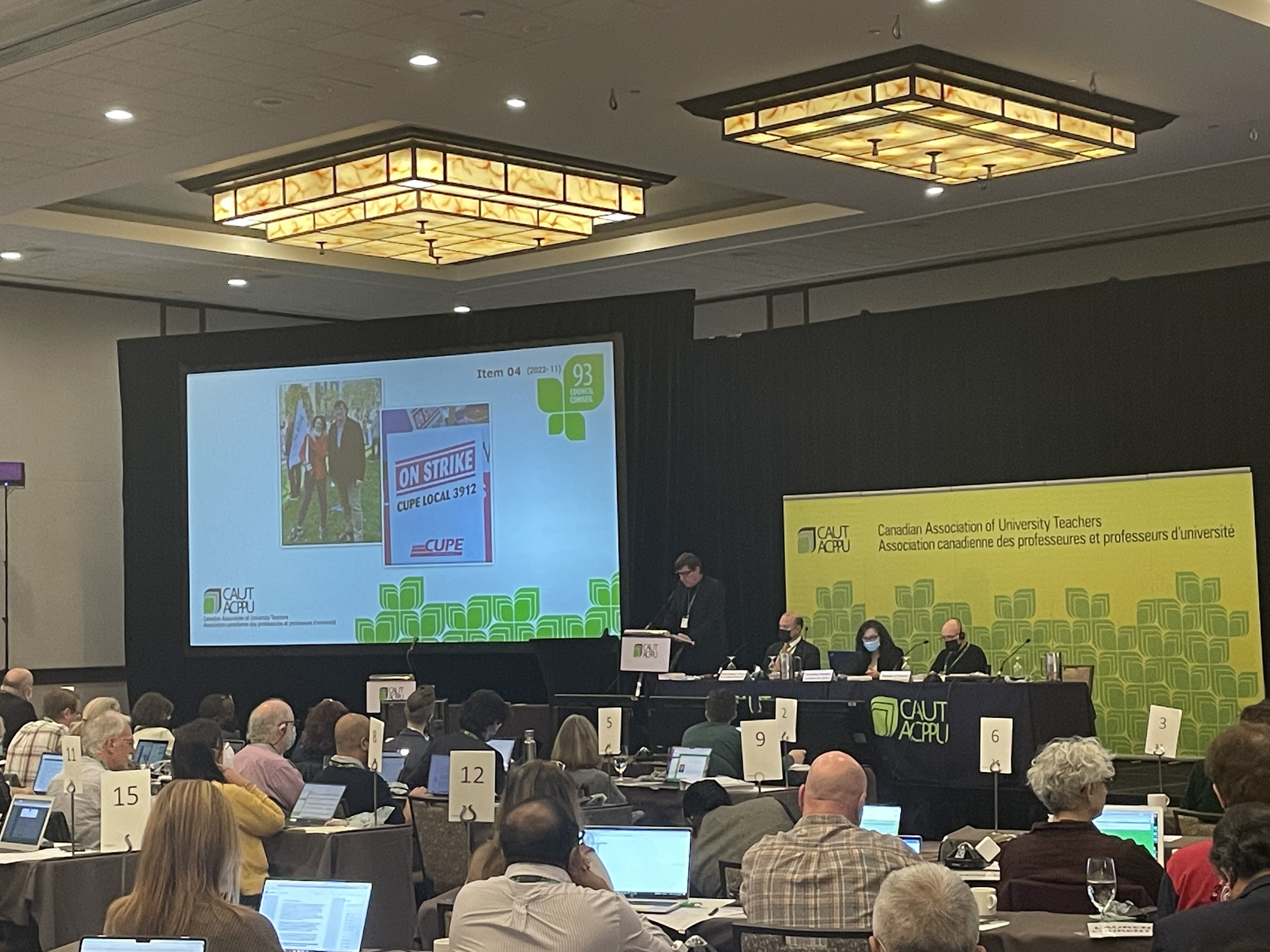 In his opening remarks, CAUT President Peter McInnis addressed the underfunding of education and the undermining of collective bargaining rights, especially the Ontario government’s recent attempt use of the notwithstanding clause to quash education workers’ right to strike. He highlighted the importance of uniting within the labour movement to ensure these rights are upheld.

CAUT Executive Director David Robinson spoke about the legal foundation of academic freedom as a professional and contractual right of academic professionals – not a privilege. Reflecting upon the recent attempt to undermine labour rights in Ontario, he encouraged CAUT member associations to get more engaged in the broader labour movement by joining NUCAUT, the National Union of the Canadian Association of University Teachers.

Robinson also provided an update on Laurentian University’s insolvency, highlighting the Auditor General of Ontario’s final report that found the use of the Companies’ Creditors Arrangements Act to be unnecessary, unwarranted, and destructive. CAUT is lobbying the federal government to exclude post-secondary institutions from corporate insolvency legislation.

He also reported on CAUT’s international participation in the UNESCO World Higher Education Conference 2022 and the outcomes of the United Nations’ Transforming Education Summit. He noted that CAUT is still working to bring an Afghan trade unionist and her family to Canada.

Guest speakers on academic freedom constraints at home and abroad

Grace Nyongesa, National Chairperson of the Universities’ Academic Staff Union (UASU), spoke about underfunding of even the most basic materials in Kenya. She told Council delegates that often teachers must buy their own supplies for their classes, and that the shortage of lecturers in universities due to low pay causes workload issues – and eventually burnout. Compounding this is a lack of academic freedom for teachers to conduct their own research.

When mobilizing to demand changes, she said that union organizers are often bought off with offers of manager positions. Insufficient health care, no protection of intellectual property online, and no policy on how to teach online were also among the issues she and her colleagues face. Grace Nyongesa is the first woman to hold the position of national chairperson at the national level at a trade union in her country. CAUT and UASU have developed a partnership to share best practices and knowledge.

Dr. Madeleine Pastinelli, an ethnologist and tenured professor at Université Laval's Department of Sociology, presented a report from the Syndicat des professeurs et professeures de l’Université Laval (SPUL) on issues arising from members’ interactions with Research Ethics Boards (REBs). Pastinelli spoke about professors who had experienced excessive restrictions on their field research to the point that it made continuing their research impossible. She cited the TCPS 2 Ethics Framework​: “In order to maximize the benefits of research, researchers must have academic freedom.”

​She also said that REB decisions at her university restrict research practices that employ an inductive approach, despite the provisions in the TCPS 2 Ethics Framework. Pastinelli sits on the SPUL executive committee as its secretary and serves as its spokesperson in ongoing negotiations with Laval.

CAUT welcomes David Newhouse as its new representative-at-large (Aboriginal). David is Onondaga from the Six Nations of the Grand River community near Brantford, Ontario. He was the first principal of Peter Gzowski College at Trent University and chair of the Department of Indigenous Studies. He is also an associate professor in the business administration program. Read Newhouse’s Bulletin article on Indigenization in academia.

CAUT Council voted to present the Milner Memorial Award to members of the Censure U of T group at the University of Toronto for their contributions to the cause of academic freedom. The group organized around the censure to increase pressure on the administration for cancelling an offer of employment to Dr. Valentina Azarova following an intervention from a donor. This case has drawn international attention and garnered solidarity from academics across the country and internationally.

January 13-14, 2023: The CAUT Forum for Presidents is an opportunity for the leadership of academic staff associations to meet peers from across Canada, share high-level discussion on key political and organizational challenges, and build networks of contact and support – all with the goal of strengthening our ability to advance the interests of our members.

February 10-11, 2023: The 6th CAUT Equity Conference is a chance to organize to advance equity at universities and colleges across the country. Participants will strengthen their change-making skills and build networks of support with activists from across Canada.

Nominations are being sought for the following positions on the CAUT Executive Committee:

The deadline for submitting nominations is March 1, 2023. Elections by secret ballot will take place during the CAUT Council meeting to be held in Ottawa, April 20-23, 2023.

The nomination procedures, description of positions and terms of office, and CAUT’s Release Time Policy are outlined here.

Nominations are also being sought for the following vacancies on CAUT Standing Committees of Council:

The deadline for nominations for members of CAUT Standing Committees is February 1, 2023.
The composition, function, terms, and procedures for selection of committee members can be found on the CAUT Website under each standing committee page. The nomination procedures are outlined here. 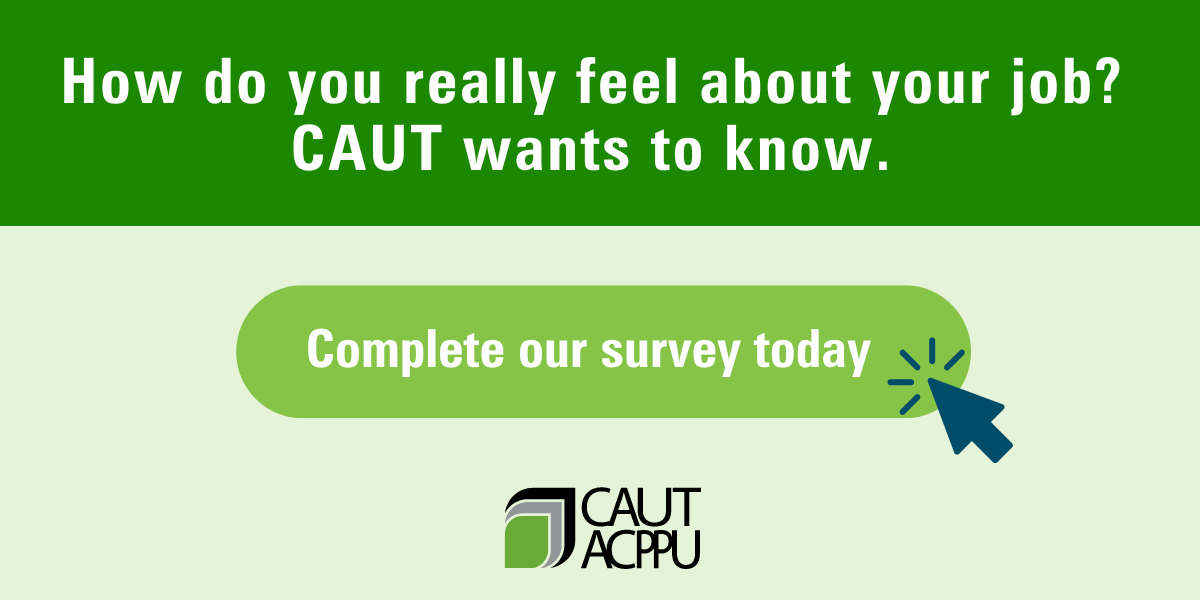 How do you really feel about your job? CAUT wants to know.

Given the significant changes over the past two years, CAUT wants to better understand academic staff experiences and attitudes towards the job, the workplace, and the post-secondary education sector. The State of the Post-Secondary Academic Profession Survey will help identify current issues and needs of academic staff at universities and colleges.

We would like to hear from associations and their members to help us determine how best to serve the CAUT community.

Please take a few minutes to participate in this anonymous survey. Thank you in advance for your time and input! The deadline for completion is January 16, 2023.