These concepts are both critical when considering salary gaps.

Pay inequity is the difference in the salary between a dominant and an equity-seeking group with similar levels of experience and qualifications (they have the same rank, discipline, years of experience, years in academia, performance reviews, etc.). The difference in salary between the groups that cannot be explained through these variables can be understood as a direct form of pay discrimination. Most pay equity studies investigate primarily pay inequity.

Employment inequity refers to discrimination within the determinants of pay which impact the pay of equity-seeking academics. For example, equity-seeking group members may disproportionately face barriers in promotion to higher ranks, resulting in lower pay relative to dominant group. In this case, discrimination in employment equity is an indirect determinant of pay.

Both pay and employment inequity may factor into the overall pay gap. For example, consider the Blinder-Oaxaca decomposition4 of the University of British Columbia (UBC)’s gender pay gap below, which shows the factors that make up the university’s pay gap.5 The majority of the gap can be attributed to factors that can be “explained”, such as rank, department, years at rank, and whether someone is a Canada Research Chair (CRC).  Employment inequity however may be influencing these factors, for example, less women in higher paid ranks or disciplines. The “unexplained” portion represents the part of the gap that cannot be explained by any other factor that is not gender; thus, it represents pay inequity. 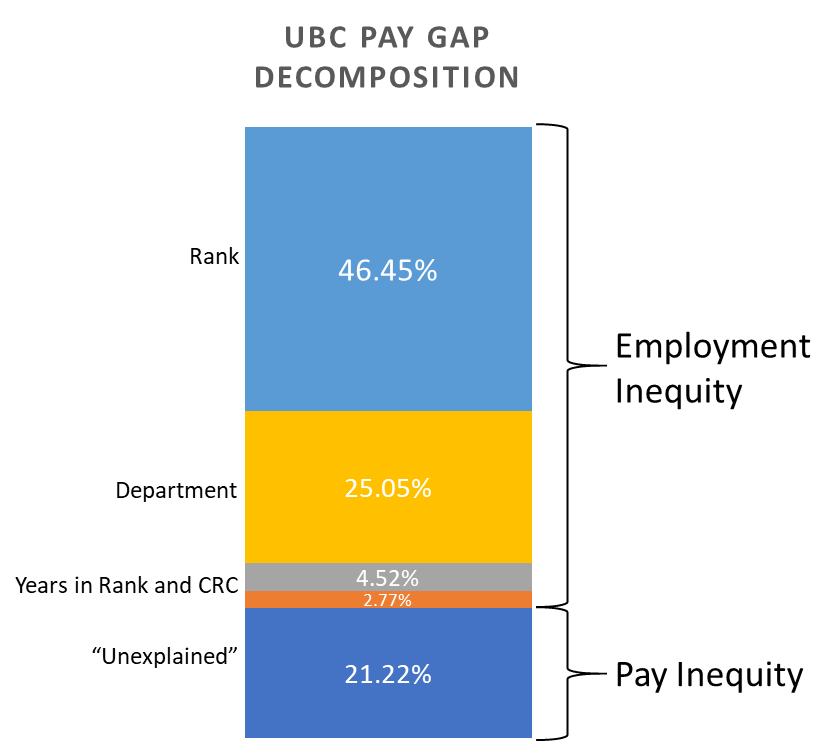 Identifying pay inequity and the various forms of employment inequity requires different analytical approaches. Pay and employment inequities also require different remedies or solutions. It is important both of these elements of discrimination be taken into account when explaining the adjusted and unadjusted pay gaps.