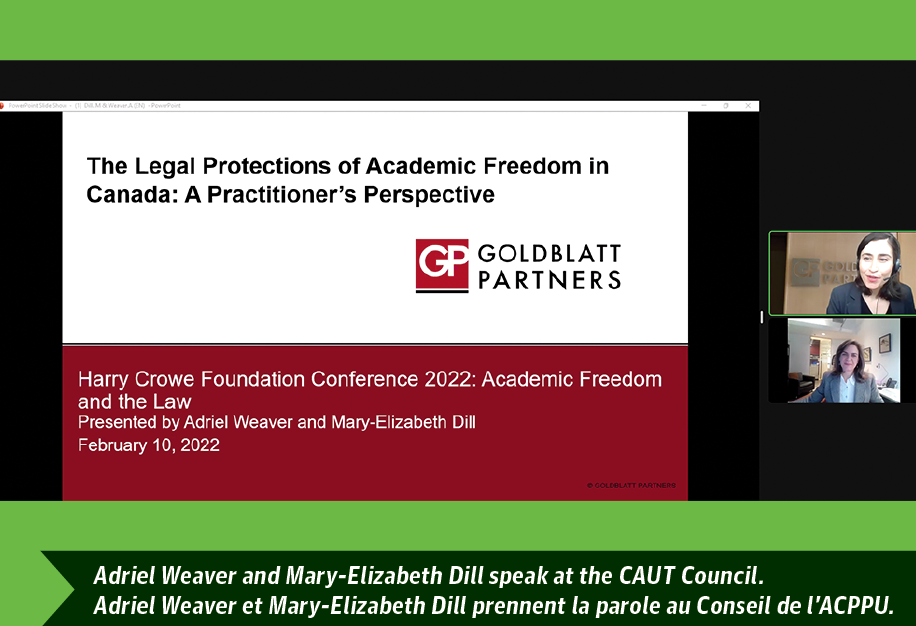 Over 150 participants took part in Canada’s first major conference focused on academic freedom and the law, held on February 10 and 11. Hosted by the Harry Crowe Foundation, the event brought together legal practitioners and academics from across Canada to explore the legal protections and limits to the exercise of academic freedom.

Unlike in most other countries, including the United States, academic freedom in Canada has limited statutory or constitutional recognition.

Mary-Elizabeth Dill, also a lawyer with Goldblatt Partners, noted that Canada does not have “robust jurisprudence” because of the “strong push to mediate and reach consensual outcome between the parties.” She cautioned that “using contractual language to enforce academic freedom” has both advantages and limits.

Several speakers pointed to the need for arbitrators to have a clear “grounding in the university context” and to take into account the “unique nature” of the academic workplace.

“It will be for faculty associations to ensure that academic freedom protections remain in collective agreements and to find ways to strategize and bargain for more robust, more specific guarantees, and to put resources into test cases,” argued Faisal Bhabha, an associate professor at Osgoode Hall Law School in Toronto.

Peter Jacobsen, a lawyer at WeirFoulds LLP, noted that “the informal nature of social media,” has been problematic for some Canadian academics.

“It might be important for faculty associations to negotiate safeguards for the use of social media in their collective agreements,” added Jamie Cameron, a professor emerita at Osgoode Hall Law School in Toronto.

These realities are why many panelists also advocated for a stronger legal framework for protecting academic freedom in Canada.

Michael Lynk, a professor in the faculty of law at Western University, pointed to three broad statements made by Canadian courts in recent history that were “encouraging”, including a Supreme Court case in 1990 which stated that academic freedom is “essential to our continuance as a lively democracy.” But Lynk was blunt in his assessment that the law “is not working hard enough to establish a liberal protection of academic freedom in Canada.”

Louis-Philippe Lampron noted that the recommendation by Québec’s Cloutier Commission to enshrine academic freedom in law is in line with what CAUT and the Fédération québécoise des professeures et professeurs d’université have both advocated.

But others argued that legislation was not the best way to protect academic freedom. The challenges that remain for “effectively protecting academic freedom in Canada … can most productively be addressed by strengthening our normative contractual approach to academic freedom, not seeking constitutional or statutory protections,” argued James Turk, a distinguished visiting scholar at Ryerson University.

There is however some value in “looking at the Charter, at least charter values in the context of academic freedom,” said Linda McKay-Panos, the executive director of the Alberta Civil Liberties Research Centre.

“Academic freedoms are one of those concepts that are self-evident to academics and those that teach and participate in the university communities, not quite so for lawyers and arbitrators,” said Craig Bavis, a lawyer at Victory Square Law Office.

CAUT’s Executive Director David Robinson noted that some of the most prominent recent cases of challenges to academic freedom involved dismissal or censorship of Canadian academics expressing in public their political or social views. Robinson advised that that Universities must set the “bar” higher for disciplining academics, as they have the right to intervene in public debates. “Otherwise,” said Robinson, “we are drop-kicked back to the era of McCarthyism.”

By the Numbers / Job action highlights

With a spring federal budget expected in the coming weeks, CAUT is stepping up its advocacy work... Read more
/sites/default/files/styles/responsive_low_constrict/public/march2022bulletin-graphic-864x386.png?itok=XXTm1mHP
March 2022