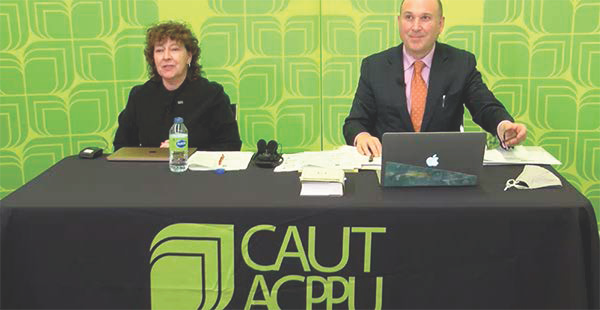 Censure against the University of Toronto lifted unanimously

Council delegates unanimously voted to formally lift the censure against the administration of the University of Toronto. The Council determined that the University had taken the actions recommended by CAUT to resolve the issues that led to the imposition of the censure in April 2021. The University re-offered Dr. Valentina Azarova the position of Director of the International Human Rights Program in the Faculty of Law, and has also taken steps to extend academic freedom to certain professional and managerial positions and develop policies that prohibit donor interference in internal academic affairs. CAUT Executive Director David Robinson recognized the efforts of the University of Toronto’s Faculty Association (UTFA), CUPE Local 3902 and the ad-hoc U of T censure group in ensuring a positive outcome in the dispute. Terezia Zoric, the president of UTFA, said the CAUT Council “facilitated the creation of space to dig into things that needed to be excavated around collegial governance—and this will have a positive impact on academic life” moving forward.

Delegates unanimously passed a motion to publicly express support for the University of Manitoba Faculty Association (UMFA) strike action, its demand for fair and free collective bargaining, and called on the provincial government to rescind its secret mandate to limit salary increases. Orvie Dingwall, UMFA president, spoke about her association’s focus on ensuring pay equity and efforts to improve academic staff recruitment and retention. Dingwall noted that the monthlong strike action was the longest in UMFA’s history and attributed its success to a “two-pronged approach,” targeting both the administration and the provincial government, and to the solidarity from CAUT members. The UMFA strike began on Tuesday, November 2 and ended on Monday, December 6, after members ratified a tentative agreement with the employer.

Council delegates unanimously passed a resolution to oppose the adoption of the International Holocaust Remembrance Alliance Working Definition of Antisemitism (I HRA) at Canadian universities and colleges, citing threats to academic freedom on Canadian campuses.

CAUT Executive Director David Robinson called on members to generously support Afghan academics at imminent risk of persecution and death, through online donations to the CAUT Refugee Foundation at Canada Helps. CAUT is working with Scholars at Risk, the federal government, Education International, the Canadian Labour Congress, and the International Trade Union Confederation to support at-risk scholars and facilitate opportunities for them in Canada.

Christine Gauthier of the Fédération nationale des enseignantes et des enseignants du Québec (FNEEQ-CSN) discussed the need for universities in Quebec to adopt a statement on academic freedom. Quebec’s Charter of Human Rights and Freedoms focuses on freedom of expression, but Gauthier argued that this is not enough as academic freedom is “fragile”. She said her members are concerned about how debates over academic freedom are framed as pitting students against faculty, and free expression against the interests of equity-deserving groups, instead of considering the broader issue of institutional practices that have an adverse impact on collegial governance.

Navigating the pandemic’s most difficult decisions

Maxwell Smith, a bioethicist and assistant professor in the Faculty of Health Sciences and Rotman Institute of Philosophy at Western University, delivered the Harry Crowe Foundation-Olivieri Lecture in medical ethics. Smith explored how the pandemic has posed new ethical challenges.

“Public health emergencies like pandemics raise questions about the types of individual sacrifices that can justifiably be made in order to protect and promote the population’s health,” he said. When navigating difficult pandemic decisions, “unless we seek to be irrelevant in ethics, we must aim to provide practical guidance to decision-makers about how to proceed, even when the most ethically justifiable path forward is not ideal,” he told Council members at a special session prior to the Council meeting.

Simon Archer, Partner at Goldblatt Partners LLP, gave a presentation on an upcoming report on how CAUT and academic staff associations can take steps to prevent universities and colleges from using the Companies Creditors Arrangements Act (CCAA). Archer noted that when Laurentian University filed for insolvency using the CCAA last February, it took university stakeholders out of the “normal way dispute resolution happens” and side-stepped how governance, funding and decisions are typically made in a university setting.

The report provides an analysis of the ways employee groups have tried to resist and offers advice to academic staff associations. The report’s top recommendation is to establish an “early warning and early intervention” system. Archer says well before there are problems, it is important to seek “enhanced financial exigency terms” so that when there is a true emergency there is already a negotiated solution that includes employees “at the table”.

Erin Patterson of Vaughan Memorial Library at Acadia University was recommended for the recipient of the Academic Librarians' and Archivists’ Distinguished Service Award. Members of the Joint Gender Equity Salary Adjustment Committee of the Memorial University of Newfoundland— Sheila Singleton, (Retired Chair), Kara A. Arnold (Faculty of Business Administration), Jennifer Lokash (Department of English, Faculty of Humanities and Social Sciences), and Nicole Power (Department of Sociology, Faculty of Humanities and Social Sciences)—were recommended for the Sarah Shorten Award. Both awards will be presented at the April 2022 Council meeting.