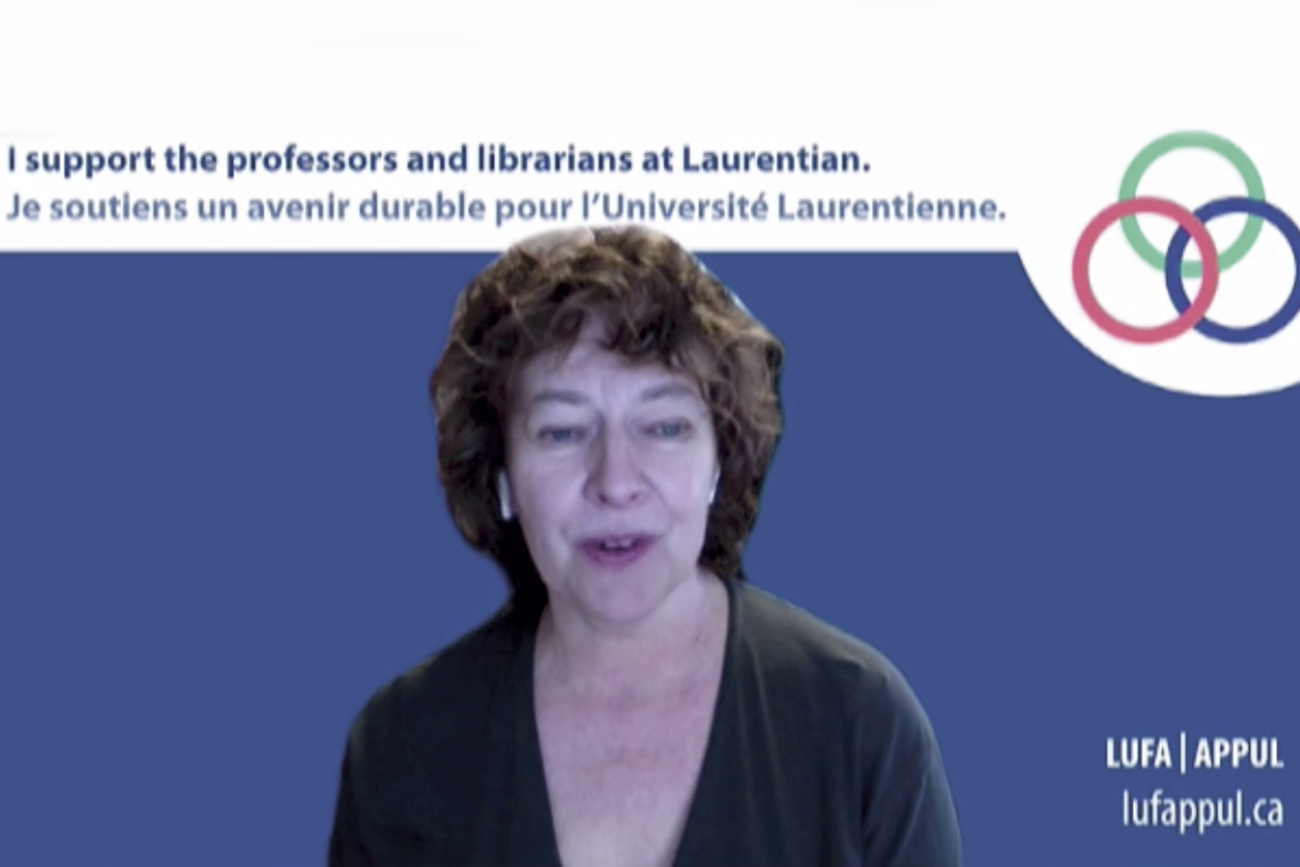 CAUT Council delegates took the very rare decision to censure the administration of University of Toronto because of its failure to resolve concerns regarding academic freedom stemming from a hiring scandal in the Faculty of Law.

“When reviewing all the evidence, CAUT Council delegates concluded that the decision to cancel Dr. Valentina Azarova’s hiring was politically motivated, and as such constitutes a serious breach of widely recognized principles of academic freedom,” says CAUT Executive Director David Robinson.

Council responds to the crisis at Laurentian University

Fabrice Colin, President of the Laurentian University Faculty Association (LUFA), spoke eloquently and movingly to CAUT Council about the insolvency process at his university. LUFA worked tirelessly under extraordinarily difficult circumstances to protect jobs and the academic integrity of the institution. In the end, over 80 tenured faculty lost their jobs and more than 60 programs were cut. Colin emphasized the importance of reclaiming universities as public institutions, serving a public good. He noted that broad sectoral support has made all the difference: “We will carry on the fight. Thank you for standing with us. These issues are important — we will never give up.”

Council delegates passed two resolutions in support of LUFA. One calls for the resignations of the Ontario Minister of Colleges and Universities and Laurentian University President and senior administrators for their roles in creating the financial crisis that has devastated the public university. The other calls on CAUT to advocate for the reform of insolvency legislation.

Motions for emergency and long-term funding for the sector

Motions were passed calling on CAUT to advocate for emergency stabilization funds for post-secondary education and for increased federal transfers, with accountability. Funding must be used to uphold key principles such as accessibility, freedom of expression, good jobs on campuses and minimal and “affordable” tuition levels, mandated Council.

CAUT welcomes the Lecturers’ Union of Memorial University of Newfoundland

A message from Education International

David Edwards, General Secretary of Education International (EI), summarized the work of the global federation of education unions in the last year as COVID, COVID and COVID. EI is pushing for adult educators to be prioritized for vaccines. Edwards says educators are “public health force multipliers” because they lead, and others follow. He warned Council members in a video message that the hardest part is ahead: overcoming “vaccine nationalism.”

“As long as one country remains unvaccinated, all countries are threatened,” said Edwards. Three-fourths of the world’s vaccines are being administered in just 10 of the richest countries, and 130 countries have yet to start vaccination campaigns. Alongside the World Health Organization, UNESCO and UNICEF, EI is advocating for changes to intellectual property rules to open access to vaccines in poorer countries.

Climate change is another EI priority. Edwards noted an “existential opportunity” — emerging from the “Trump wasteland” — to assert the role of educators in leveraging important pandemic lessons to help the planet.

Edwards also pointed to important new EI research showing that faculty have been responsible for pivoting their teaching practice online without sufficient support, time and resources. EI is calling for professional unions to be part of a “collaborative process” to define what success looks like in post-pandemic education.

This policy calls on universities and colleges not to use excessive security costs to prevent invited speakers from participating in events scheduled by members of the campus community.

Institutions and academic staff associations have a responsibility and a legal obligation to ensure individuals do not suffer discrimination or harassment because of mental health disabilities. The new policy provides guidance on the duty to accommodate, the duty to inquire, and how to handle administration requests for medical information from members with mental health disabilities.

Michael Shaw of the University of Manitoba Faculty Association (UMFA) outlined efforts to defend academic staff associations’ right to free and fair collective bargaining. He said the provincial government “made it clear that if the university gave us a single dollar, it would be penalized.” UMFA has joined with the Manitoba Organization of Faculty Associations to lobby MLAs and organize collective actions — such as a “honk-a-thon” to circle the Manitoba legislation. Such actions helped shrink proposed government cuts. But Shaw warned that the only real solution is “a change of government.”

More member engagement is key for the University of Lethbridge Faculty Association (ULFA). In 2018, the membership pushed for ULFA to take an equity proposal to the university, which it rejected, shared Aaron Chubb. “Members sent us back to the bargaining table. They insisted that equity be addressed — and it was.” Chubb discussed the role of members in bringing about change and highlighted the messaging app Slack as a “game changer”, allowing members to talk directly to the chief negotiator during collective bargaining.

Robin Whitaker of the Memorial University of Newfoundland Faculty Association (MUNFA) said public protests in 2016 forced the government to back down from public sector cuts, but austerity still looms. MUNFA is working to change the “dominant narratives and myths” — such as “we have a spending problem.” Josh Lepawsky of MUNFA discussed the coalition work underway to counter the case for austerity.

Peter McInnis, CAUT Vice-President, highlighted some of the key issues in the profession and called for a discussion on how to engage members in federal advocacy. “Public funding has not kept pace with growth. In 2020, private revenue eclipsed public for universities for first time in decades; the last federal top-up to the provinces was in 2008. Meanwhile student enrolment is up by 20% and the increase in full-time faculty is only 6%.”

McInnis said with a federal election ahead, this a key moment to “drive PSE higher on the federal agenda” and noted that “post-secondary education is key to Canada’s recovery.” As Marc Schroeder from Mount Royal University commented, “what is at stake is reversing the corporate capture of our universities.”

A round-up of government budgets 2021