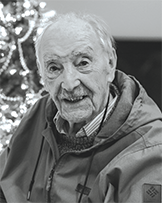 One of the key organizers of the Dalhousie Faculty Association (DFA), Robert S. (Bob) Rodger passed away peacefully on January 8, at the age of 94. Born in Scotland, he came to the university in 1968 as a Killam Senior Fellow after working as a senior lecturer at the University of Sydney where he won the John Smyth Memorial Medal in recognition of his contribution to education. As a full professor and former chair of psychology at Dalhousie, he wrote many scientific papers and textbooks, mentored graduate students and developed his own statistical method known as the “Rodger's Method.”

Bob balanced his career with family, and a steadfast activism that defined his legacy. In 1978, he spearheaded the certification of the as the bargaining agent for professors, instructors, librarians and counsellors at Dalhousie. His extraordinary efforts resulted in the successful certification drive and his exceptional vision helped conclude a model collective agreement that has protected the rights of academic staff for over 40 years. Bob served as the DFA President in 1978-79, leading the organization through what would have been a challenging period of transition. In recognition of his contributions to the Association, the Dr. Robert S. Rodger Lecture Series was introduced in 2018, during the DFA’s 40th anniversary, to mark outstanding achievements in the promotion of collective bargaining and academic rights.

News / Education for All campaign launches

By Stephanie Ross, Larry Savage, & James Watson There is little doubt that the casual nature of... Read more