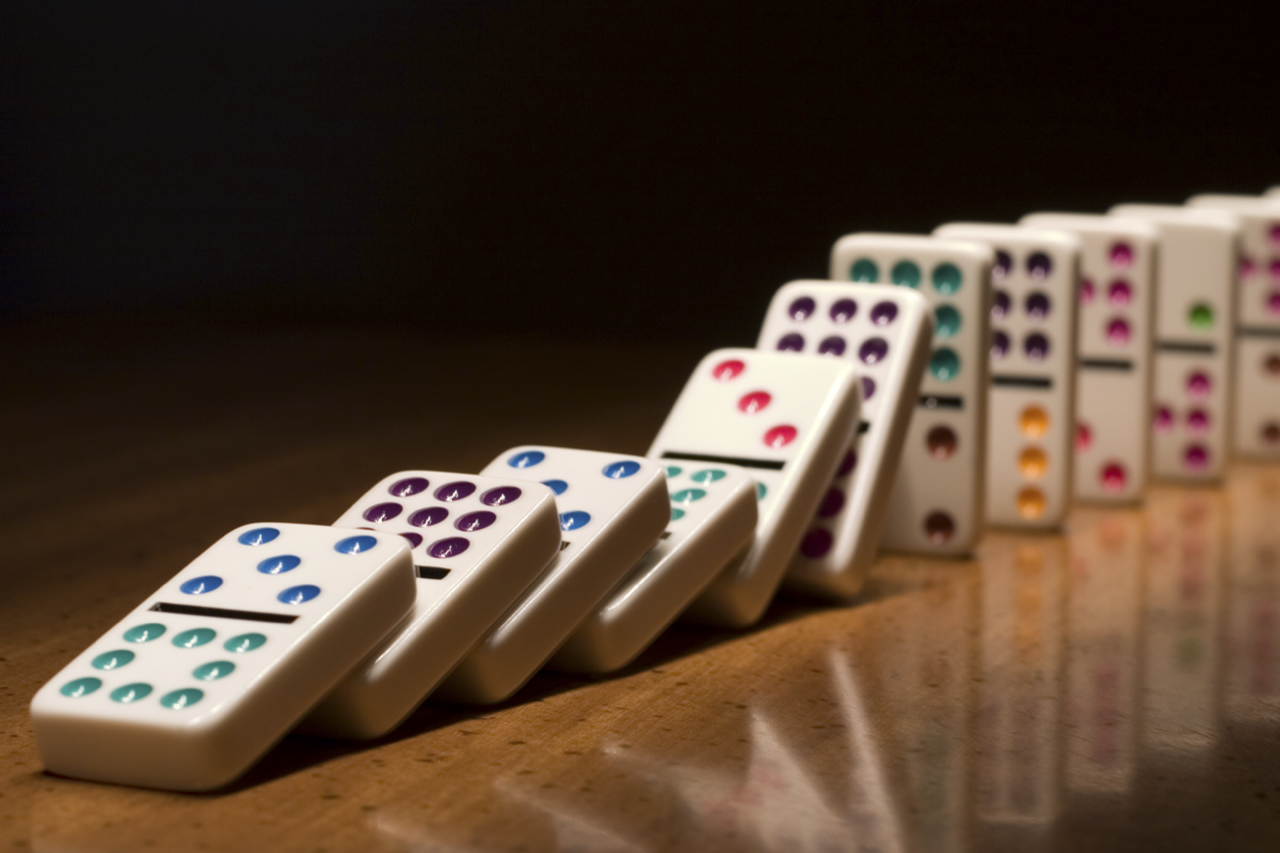 Like clumsily knocked over dominoes, one by one our provincial governments are tripping over themselves in their rush to impose under-developed and misguided performance-based funding schemes upon their post-secondary education sectors.

As Alberta scrambles to meet its self-imposed April 1st deadline — the date is right if nothing else — it is increasingly clear that it will join Ontario in tying a significant proportion of funding to a narrow set of specific indicators linked to labour-market outcomes; for example, graduate employment rate; employment in a related job; and graduate median income, to highlight a few of the numerous (up to fifteen) indicators under consideration. By all accounts, Manitoba and New Brunswick are set to fall in line as the next to succumb to the questionable performance-based funding fad, with Saskatchewan, always in fear of being left out, poised to join the queue.

The program is clear, if never stated: It is yet another step towards coercing the traditional university away from its aspirational ideals. Instead of being an accessible institution dedicated to fostering critical, creative, and engaged citizens while generating research and engagement which benefit society, the provinces seem intent on devolving university campuses into training centres dedicated to churning out atomized workers and market-focused scholarship.

Beyond their function as thinly-disguised funding cuts, as has been the case in both Ontario and Alberta, what could be the possible motivations for implementing the kind of performance-based funding schemes that have already revealed themselves to be costly failures with dire and unwanted consequences in other jurisdictions? Let’s take a closer look by examining a few possible reasons: student choice and future labour-market needs, administrative costs, and innovation.

Contrary to traditional conservative government talking points about offering more choice and cutting red-tape, these new performance-based funding metrics will result in neither.

It is impossible to understand how off-loading more of the tuition burden onto students (while shifting funding away from areas of study that may not immediately serve the current labour-market) actually translates into more choice for students. Universities do not control the labour-market, and governments that use current labour-market needs to direct their PSE funding usually get it wrong. A recent Maclean’s article by Max Fawcett makes this point abundantly clear, “10 years ago, Alberta needed geologists and petroleum engineers. Now they're unemployed. See what happens when post-secondary funding is predicated on a boom-and-bust economy?”

Corroborating this point is the Government of Canada’s 2017 Report From the Expert Panel on Youth Employment. The report highlights: “The shift away from manufacturing to service and knowledge economies means there is a greater emphasis on “soft” skills like problem solving, communication, interpersonal skills and critical thinking”. The report concludes, perhaps obviously, that “the world of work is transforming rapidly” and that the key to navigating such a future is to remain flexible and fluid. It goes on to state: “Some of the next job opportunities may not even exist today — they might be in the natural resource sector, or in the digital economy or they may be created by young Entrepreneurs”.

It is precisely in the area of flexible thinking and the just mentioned soft-skills where universities excel. However, in order to maintain their ability to remain consistent in their quality offerings — whether they be in professional schools, humanities, social sciences, or sciences — universities require predictable funding based on traditional inputs such as student enrolments, faculty complement, institutional space, and so on. Keeping universities in a perpetual state of uncertainty will only limit, not enhance, their ability to offer innovative programs that build on their traditional strengths and that best serve society.

Imposing performance-based funding systems will invariably lead to the addition of another layer of bureaucracy at both post-secondary institution and ministry levels. There will, with little doubt, be new or reclassified university management positions whose sole purpose will be to assess, report, target, and ultimately game the new metrics. On the government side, bureaucrats will be needed to gather, evaluate, surveille, and, in the longer term, respond to the manipulated metrics as well as to their unintended consequences. For a pithy example of the distortions that happen when coercive metrics are imposed, one need only glance at the UK where various versions of the Research Excellence Framework have unintentionally led to the de-emphasis of teaching. In an attempt to counter this particular side-effect caused by the REF, the government responded by creating the Teaching Excellence Framework in an ever-expanding set of precipitous choices made by politicians caught up in the unwieldy spiral of dealing with the consequences of metrics and their unintended outcomes by adding even more of them. It is no surprise that this has led to bureaucratic bloat, while diverting larger and larger pieces of the pie away from teaching, research, and service — the very budget line items that actually serve students and society.

Indeed, these are classic examples of what is known as Campbell’s Law: put simply, the more an indicator becomes a target the more it distorts that which it set out to measure. In discussing examples taken from the former U.S.S.R., Campbell (1976) relays accounts of nail factories overproducing their biggest nails when targets were in weight or, if the targets were in quantity, only producing their smallest nails. As performance indicators were set as quantiﬁable and enforced production targets, they would inevitably lead to the underproduction of needed items and the overproduction of redundant items. Many of us will, no doubt, find it especially ironic that Premiers Kenney and Ford would seek to copy old Soviet-style planning.

Metrics like “Sponsored research funding” (as both Alberta and Ontario have adopted) will actually lead to a narrowing of scholarship, of what is possible, both in teaching and research, as academics start to focus on what counts and what is rewarded instead of what matters. A great deal of important and groundbreaking scholarship requires little or no funding, and/or is rooted in the communities in which our institutions reside and serve. But metrics such as this inevitably negatively impact society by robbing it of opportunities for risky, yet innovative breakthroughs, community-engaged research, as well as other valuable areas of research and training that cannot easily be measured or reflected by a simple financial calculus. Making matters worse is the perverse incentivization of competition rather than collaboration, as universities hunt for the spoils left over from their under-achieving (based on the faulty metrics) provincial counterparts. In short, researchers start to play it secretive and safe, sticking to conventional fields and methods in their pursuit of the targets, rather than the ground-breaking new ideas, collaborations, and uncertain but innovative paths that become the monumental game changers, or the initiatives that are most meaningful to our communities.

Many interviewees said that current research culture promotes ever-higher production of outputs, competition and accountability — themes that often appear in academic discourse on this topic. Interviewees spoke extensively about the growing dominance and impact of metrics on research culture. While they were not opposed to metrics in principle, they were concerned with how these are used. The growing focus on performance measures was often blamed for a range of unintended consequences including perverse incentive structures, gaming the system and low morale. It was felt that, depending on an institution’s interpretation of topdown policies, different metrics would be prioritised and pushed down on to individuals”.

Both surveys should provide us (and our policy-makers) with an extremely loud wake up call. The situation is so critical that it necessitates the full attention of our associations and, in all likelihood, requires a series of responses not the least of which is to work with students, parents, members of the public, the business community, as well as our own university administrations and boards, as we call out the perils of these kinds of performance-based funding models. Whether by teach-ins, national days of action, or resistances yet to be formulated, we must stop performance-based funding, as proposed in Ontario and Alberta, before it irreparably harms Canada’s world-class post-secondary education system.

By the Numbers / Spillover benefits of post-secondary education

President’s message / Working together for a stronger community

Book review / Course Correction: A map for the distracted university