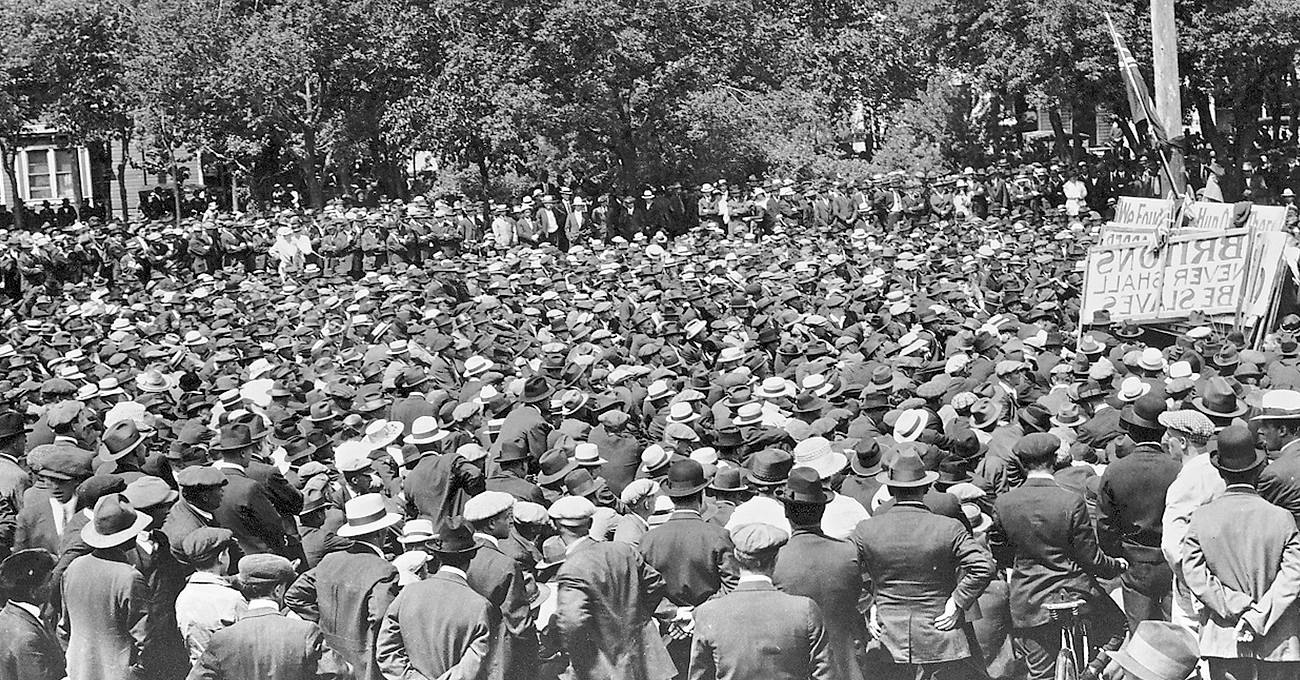 This year marks the 100th anniversary of the Winnipeg General Strike, a defining event in the history of Canada’s modern union movement. Iconic images including police mounted on horseback shooting into defiant crowds, and an upturned and flaming streetcar are still recognizable today, silent testament to the unrest and violence unleashed by conditions of the times, and culminating in “Bloody Saturday” — June 21, 1919 — when two strikers died and dozens of others, including police, were injured.

A variety of events around the city will honour these memories, including installation of a tilted and half-sunken streetcar monument at the corner of Main Street and Market Avenue, where the riots occurred, and just a few blocks from the city’s well-known intersection of Portage and Main where 21st century traffic now streams ceaselessly.

“We’re pretty excited about it,” says Janet Morrill, president of the University of Manitoba Faculty Association. “UMFA is one of the sponsors of events organized by the Manitoba Federation of Labour, and I’m hoping we’ll be pretty prominent in it.”

Working conditions in Winnipeg in 1919 would shock most people today, and Morrill understands that certification of UMFA by the Manitoba Labour Board in 1974 is part of the legacy of the groundbreaking strike. A century ago, the event spawned the birth of the first mandated minimum wage, and led the way for unionization of workers, improvements in employment and social conditions, and ultimately to recognition by the Supreme Court of Canada of the right to strike as essential to a meaningful process of collective bargaining protected by Canada’s Constitution.

UMFA and its members are representative of academic staff who banded together as associations through the last century, but which prior to 1970 remained non-unionized. CAUT was founded in 1951 and assisted individual members on a case-by-case basis, often with issues centring on denial of tenure or breach of academic freedom. Other than through CAUT, academic staff had little recourse to dispute decisions made by administrators, yet remained wary of stronger collectivism through unionization.

Nevertheless, clear reasons for doing so were becoming evident during the 1960s as salaries and benefits of academic staff fell compared to other professions, while professional rights weakened.

“Prior to unionization, associations at the time informally negotiated some terms and conditions of employment, but rather than full-fledged collective bargaining, this was an arrangement best described as ‘collective begging’,” says CAUT executive director David Robinson. “While associations were allowed to engage in consultations, policies were most often set unilaterally by the administration. Changes to salaries and benefits depended entirely on the goodwill and agreement of the board of governors.”

By the late 1960s, academic staff were debating the merits of unionization, with opponents arguing it would undermine collegiality, professionalism and autonomy. But the tide had turned, and in 1970, the Association des Ingénieurs-Professeurs des Sciences Appliquées de l’Université de Sherbrooke became the first faculty association in Canada to unionize, with others following through the ensuing decades. Today, the majority of academic staff in Canada’s public universities and colleges belong to unions — making them among the most unionized workplaces in the country.

Gains achieved by the movement extend far beyond increased salary and benefits negotiated at individual institutions. In 1976, the Syndicat des professeurs et professeures de l’Université Laval became the first academic union in Canada to strike, an action that spurred creation of the CAUT Defense Fund in 1978. Forty years later the assets of the fund now stand at more than $25 million and serve to support members engaged in an authorized strike or lockout.

John Kingma, president of SPUL, points to the story of certification prominently displayed on their website, and said unions have played a crucial role in evening out the bargaining power between employers and employees.

“Unions are important for academic staff and they play an increasingly important role in defending the interests of their members,” he says. “I would reiterate and update the words of former SPUL president Gerald Lemieux: ‘The only rights we have are those we claim and that we are ready to defend.’”

Morrill agrees that the ability of unions to present a show of strength has far-reaching implications extending beyond the moment. In UMFA’s case, that collective strength was tested during a 2016 strike that lasted three weeks and ended with a year-long contract and $0 for increases. The Manitoba Labour Board subsequently ruled the university committed an unfair labour practice and acted in bad faith by withholding secret discussions with the provincial government mandating the wage freeze. Ultimately, the university apologized and paid more than $2 million in compensation to UMFA members.

“You feel that sense of power and realize we can be a force to be reckoned with,” Morrill notes. “The administration takes us far more seriously now. What we got at the point of the strike was one thing, but the dividends continue. Knowing what we accomplished, and all of us knowing we could do it again, affects the relationship with administrators in a pretty profound way. It gives us clout, and I would go so far as to say, without a union, you have no power at all.”

The “clout” of unionization was at the forefront of historic gains made at Ontario’s 24 public colleges after a five-week strike shut down campuses in 2017.

“Our strike highlighted the shift to a neoliberal business model that’s infected universities and colleges across the board,” says JP Hornick, coordinator of the school of labour at George Brown College, and the 2017 chair of the Ontario college faculty bargaining team represented by the Ontario Public Service Employees Union.

“Precarious employment may be the basis for an updated, modern version of the general strike. We were really trying to push back against it, and the strike centred on the issues that are core in the system: precarity, and governance and academic freedom,” Hornick says. “What we gained was immense, because while university staff take academic freedom for granted as part and parcel for what you need to function properly in an academic setting, we never had it at the college level.”

“The colleges had sworn up and down that we’d never get it in our collective agreement, and we did,” Hornick says, referring to the arbitration decision handed down after the provincial government legislated an end to the strike. “We won that language, and also increased job security for our unionized contract faculty. The strike unified our sector in a way that surprised the employer. It set the bar.”

OPSEU has also mounted a constitutional challenge of the back-to-work legislation, citing the 2015 SCC decision in Saskatchewan Federation of Labour v. Saskatchewan. The decision saw the majority on the Court affirming the right to strike as protected under s.2(d) of the Canadian Charter of Rights and Freedoms, and as essential to a meaningful process of collective bargaining by allowing workers to withdraw their labour when bargaining reaches an impasse.

Additionally, the court concluded that exercising a right to strike is “an affirmation of the dignity and autonomy of employees in their working lives.”

Peter Barnacle, who joined the legal team working on behalf of the SFL before the Supreme Court, and who now serves as legal counsel for CAUT, says “the court saw that the right to strike promotes equality in collective bargaining, and recognizing the right to strike is consistent with Canada’s international human rights obligations as a party to international treaties that expressly recognize that right.”

The decision ultimately affected academic staff associations across Alberta, whose members previously did not enjoy a right to strike, with legislation requiring that contract disputes be settled through compulsory binding arbitration.

The 2015 SCC decision effectively annulled that provincial law, and with the passage of new legislation, the right to strike is now granted to academic staff as well as graduate students and post-doctoral fellows.

Robinson says that a constantly changing legal and social landscape means unions remain as relevant today as ever.

“Academic freedom and tenure were far more precarious before unionization. Legally enforceable collective agreements and grievance processes have allowed academic staff to defend principles of due process and academic freedom from administrative abuse, and will continue to be the tools unions depend on to stand against future threats.”

Hornick believes academic staff unions are not only still needed, but are at a moment in time requiring sober second thought on expansion of roles and actions needed in a rapidly changing world.

“Unions are absolutely still needed, and we need a strong, cohesive recognition that the economic problems facing many of us aren’t individual, but systemic: we need collective action to push back against that,” she says. “Our labour movement can’t continue to primarily protect only our own members without looking outside our bubble, or risk making unions a less attractive or obvious option for fighting back. We are really in a moment where we have to relearn how to do grassroots movement building. We have that responsibility.”

By James Compton Where does hope for positive change in post-secondary education come from?... Read more
/sites/default/files/styles/responsive_low_constrict/public/dissident_knowledge.png?itok=FvJzG9iV
March, 2019