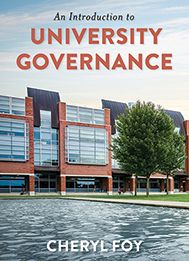 An Introduction to University Governance is a disappointing book, perhaps especially because it represents a lost opportunity for something badly needed in the sector: an orientation to university governance for external board members who are new to the unusual world of academic leadership.

That such a book is necessary is obvious, even from the headlines. As the debacle at Laurentian University demonstrates, a board that is not doing its job can end up destroying decades of investment in the people, programs, and buildings that make universities points of civic pride and engines of economic development.

As Foy points out, the centrality of debate and consultation in the day-to-day operations of universities can be hard for outsiders to understand. A guide that explained the value behind this central fact for new board members coming from a corporate world would be a very valuable contribution.

This, however, is not that book. An Introduction to University Governance is less a guide to understanding how universities operate than a primer on what the author believes new board members should think about them.

Perhaps the most important of these is that you should always listen to your “Governance Professional.” Ideally, this person will be — like Foy herself, as it so happens — secretary to both the board and any senate-like organisation on which faculty and students have a strong voice. They will also — again like Foy — be general counsel or occupy some similar position, so that boards can get both their legal and organizational advice from the same person. Governance Professionals, it turns out, work very closely with university presidents and other members of the senior administration to ensure things “run smoothly.” Apparently, they are also immune to the problems posed by conflicts of interest, bureaucratic empire-building, or special pleading.

Beyond this, Foy’s main point seems to be that board members should be particularly careful around anybody who is not a member of the senior administration or who has not been appointed to the board of governors from the corporate world (on the basis of a “skills matrix”). This includes representatives of stakeholder communities such as alumni, community members and students. It especially includes faculty members, whom Foy believes are often incapable of separating their interests as employees, teachers, and researchers from those of the institution as a whole.

It also includes faculty unions — which Foy argues are a legacy of nineteenth-century industrial conditions that have little if anything to contribute to contemporary university governance —and CAUT. Foy is particularly scathing of CAUT’s definition of academic freedom, which she claims is “at odds with tenets of good governance.” She doesn’t actually explain why this is so, mindful of her first rule (listen to your Governance Professional), it appears we are simply to take her word for it.

In contrast to faculty members, faculty associations and CAUT, Foy believes that boards should take pretty much anything administrators, Universities Canada, or former university president and faculty union critic Peter Mackinnon says at face value. This ranges from finding the right time, place and tone to let administrators know if you have questions about whether they are pursuing the right course of action (so that your criticism “can be received constructively”), to assuming that the Universities Canada definition of academic freedom is as self-evidently correct as CAUT’s was not, to understanding that Peter Mackinnon’s books contain pretty much everything you need to know about students, universities, and Board- Faculty relations.

The problem with all this, of course, is that board-level, institution-wide problems at universities are rarely caused by the people Foy thinks need the most watching. Bankruptcy, governance scandals, conflicts of interest with major donors are not usually the result of misbehaviour by students, faculty members or CAUT. Telling new board members that they should watch out for the hens but mostly trust the foxes is no way to govern a henhouse — though it does produce happy and well-fed foxes.

Universities are complex institutions that operate by different rules from many other industries in a very public and international context. External board members have a valuable role to play in governing them, but only if their orientation focusses on how they are run rather than what they should think about them. By giving free reign to her many obvious hobbyhorses, Foy ensures that there is still space for a primer on university governance written for new board members who are unfamiliar with university customs and culture.

By CAUT Staff The Alberta government last month eased up on some of the restrictions it imposed... Read more
/sites/default/files/styles/responsive_low_constrict/public/september-bulletin-2022-fabrice.jpg?itok=PixKt61C
September 2022